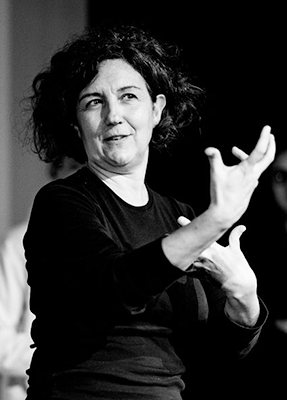 Simona is both director and playwright with a special interest in contemporary plays, adaptation of classics, writing and the performing arts.

Simona has always dealt with stories, worlds and people. Whether it is as director of a show, writing or discovering the potential of artists or companies, she mainly focuses on surprise, growing, maturation and enrichment. She likes to teach and travel, and often does them together.

Eclecticism and curiosity are her engines, the study and research of new forms of expression, communication and relationship are her directions. As a Wyder, her favorite playground is emotions, and she strongly believes that hard work on herself and her team are the basis for a positive and effective transformation of the future.

She graduated in Directing at the School of Dramatic Arts Paolo Grassi in Milan and has been a member of the European Directors Club at the Union of European Theatre, along with creating many European projects with Piccolo Teatro of Milan and directing plays around Europe.